What is a PPC?

What is a Powered Parachute (PPC)

Understanding the World of PPCs is important to really appreciating what a PPC is, and is not.  Except for the UAV (e.g., drone), a PPC is the youngest variant of piloted aircraft types, not developed until the 1970s when parachute materials, lightweight engines/airframes, and novel configurations made them possible.  As a result, the PPC is not nearly as entrenched in the historical and cultural identities of aviation, and so it is often misunderstood.

What is a Powered Parachute (PPC) aircraft?

Since this is the “Internet”, there’s not a lot of value in rewriting what has already been said elsewhere, in detail.  So our first recommendation is to look at two basic resources:

Once you’ve read and reviewed these, we can clarify some things that are said (and unsaid) in these resources.

Firstly, a PPC can REALLY be defined as an aircraft with the three following elements:

That’s about it.  The other resources define some additional engineering characteristics, but the 3 listed above are the most obvious ones.  There are probably a lot of things that you might commonly see across the spectrum of flying PPCs, but many of the attributes are not obligatory.  For example, some have argued that the PPC will have 3 wheels, but there are some 4-wheel designs that have been built and are just as equally valid.  While no one (to our knowledge) has ever built a puller prop version of a PPC – and which we imagine might be extremely uncomfortable to fly – it is nonetheless not strictly prohibited by design.

PPCs vs. PPGs, and LSA vs. Ultralights

[Disclaimer: this discussion focuses on United States variations; these distinctions may be different or not exist in other countries]

We’ll start with PPCs versus powered paragliders (PPG), and this is where things start to get tricky.  PPGs actually come in two flavors: foot-launched and trike variants.  Foot-launched PPGs are pretty distinct, but from a distance a trike-based PPG might seem almost identical to the PPC.  For this distinction, characteristic #3 is the easiest way to pick out PPGs… ‘hands in the air’.  That is to say, the canopy controls are being managed using hand controls, which means you should see the pilot with their arms physically reaching up.

Distinguishing an LSA/registered PPC from an ultralight PPC is virtually impossible to do from a distance.  It’s not until you are up close that you can look for the FAA registration number (e.g., N-number or tail number), which must be at least 3″ high and visible from both sides of the aircraft.

So, we can summarize and highlight the most critical differences between the three categories below. 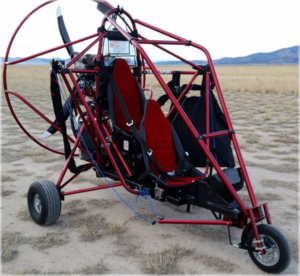 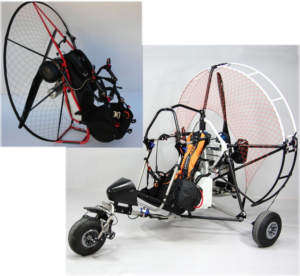 So why the hubbub about making these distinctions?  Well, it becomes personal for some Light Sport PPC pilots.

This is now compounded by three other facts:

Are we starting to see the problem?

We are not suggesting that all ultralight and PPG pilots are wild, lawless, risk-taking, one-upsmanship, exhibitionists (let’s call these people ‘hooligans’ for the sake of brevity).  But because of the limited government oversight in those categories of flying, they become a natural attractant for hooligans who want to fly.  Yes, we’ve encountered a few Light Sport hooligans too, but they are most definitely the exception, and they tend to find themselves isolated by other Light Sport pilots in short order.

BUT, the casual observer who thusly sees a hooligan flying – a motor on their back and a parachute overhead – will most often think in the simplest concepts of ‘powered’ and ‘parachute’… and it all goes downhill from there.  The lack of fine distinction has resulted in a fair share of Light Sport PPC pilots being verbally harassed, harangued, threatened by other pilots, ‘reported to the FAA’ by controller towers, and even attempted to have them arrested for trespassing by airport managers.

It doesn’t help that Light Sport pilots can hurt their own cause, too.  LSA PPGs will sometimes opt to fly at or near the same areas that ultralights and PPGs fly (for fair reasons), but it means we’re indirectly contributing to the perception that we are in fact the same as ‘them’.  Then, when that same Light Sport pilot rolls into a traditional airport (even with an N-numbered aircraft), the airport operators and resident pilots respond accordingly.

This site is dedicated to celebrating the Light Sport PPC and the certificated pilots who fly and maintain them.  The goal of this site is to focus on safe practices, best practices, and practice-practice-practice in the pursuit of ensuring enjoyable flying.  Light Sport PPC pilots are the responsible representatives of flexible wing flying to the general aviation industry.  It means that Light Sport pilots have a responsibility and duty to ‘do it better than the other guys’, if for no other reason that to preserve our integrity and right to operate in controlled airspace.